Chakra is a yogic word from India and literally means a wheel, whereas other cultures have different names for the same part of our energy system; Dantien is the Taoist Chinese, the Hawaiian Huna refer to Auw centres and in the Cabala the name is The Tree of Life. All the cultures have mapped the same energy system.

A definition of chakra is “a vortex of energy and emissions operated by hormone instigation and by the autonomic nervous system. The chakras form the front line of the body’s homeostasis.” That makes the chakras very important indeed. Their electrical function can be likened to transformers to feed the higher voltage energy fields of the aura into the sub-circuits of lower electro-magnetic energy of the meridian system. The chakra and the meridian systems are therefore intrinsically linked in order to form a distribution network for the life force energy.

I read some time back of an experiment where two scientific investigators of vital life force were testing the theory that we need energy from outside of us in order to live. One of the men was connected to a heart/vital signs monitor and then his crown and heart chakras were covered with lead. The other scientist was so startled by how quickly his colleague’s vital life signs were diminishing they had to immediately stop the experiment because if it continued he would die. 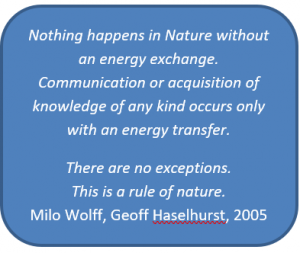 Every organ, tissue, gland and cell in the body depends on a regular and uninterrupted supply of this energy in order to carry out the process of sustaining life. If the energy flow is restricted, shielded or blocked it can eventually lead to illness or disease. By finding and correcting the imbalance of the whole system of energy, we help to restore the natural equilibrium and good health.

The laws governing Quantum Physics has demonstrated that everything in the Universe is made up of vibrational fields; including the human body.

Ancient Chinese and Indian medicines are both advocates of unblocking and releasing energy disturbances inside and outside the body in order to alleviate the symptoms of disease. The vital life-source energy systems of the chakras and meridians are barely acknowledged or used in western medicine; in western culture the emphasis is on the things that can be seen under the microscope.

Chakras, meridians, aura and other energies in the body are collectively known as subtle energies of human and animal bodies. They interact with, and depend upon, the energy from the Earth and the Universe. As the experiment above indicated, if that source is blocked, we die. Recharging these energies is also dependent on breathing, eating healthy foods and drinking pure water.

There are seven main chakras which are shown in the diagram and they are numbered from the low to high on the body. The name of each is the associated part of the body where they are found:

Our instincts are involved with the lower chakras; thoughts and feelings with the higher chakras. Up to 12 chakras can be activated in some people but the others are not the subject of this article. The chakras are typically depicted with an associated colour; colours in the light spectrum have a unique vibrational frequency and therefore so do the chakras.

Some people have the gift of being able to see the energy colours, such as the author and energy worker Donna Eden. Donna writes that the colours are unique to every person. In her book Energy Medicine, she describes the chakras as having seven layers each of which corresponds with areas of life. This concept starts at the top layer which is related to recent events that have yet to be integrated into the energy. Then through the events of early life reaching down to the seventh layer. The seventh layer can be concerned with other lives lived (by the soul) and of unfulfilled potential that is waiting for the right time to bloom from the wisdom of the soul. Our chakras therefore, show our biography.

Our mental, emotional and physical health requires the chakra energies to be clear and free-flowing. All manner of health problems can occur when the Chakras are out of balance. Examples include where head and heart are imbalanced it can lead to difficulties in relationships. The organs in the region of any chakra will reflect an imbalance seen in the chakra and vice-versa. The chakras can have various levels of activity. When the Chakras are described as “open,” they are considered to be healthy.
Ideally, all chakras would contribute to our well-being. Our instincts would work together with our feelings and thinking. However, this may not be the case. Some chakras are not open enough (being under-active), and to compensate, other chakras are over-active. The ideal state is where the chakras and their associated organs are balanced.

The meridian system is comprised of twelve principal meridians which are distribution paths for the energy in the body. Two of them, called central and governing, act as vessels to store the energy inside the body. Given the characteristics of each meridian and the service they provide to the organs, we refer to them individually but they are in fact a single system which is fully integrated with the chakras.
The meridians are powerful circuitry in the body that:

The diagram shows an approximate view of the flow of energy through the meridians and references their associated organs. Notice that some are on the front of the body, such as stomach and liver, bladder is on the back whereas heart, small and large intestine are on the arms. They all have start and end points and where one finishes, another starts nearby.

Recent scientific discoveries are proving that this ancient, almost mythological, energy is very real. Its effects have been measured in the laboratory; it constitutes a fifth force which has been overlooked by Western physics. The scientific world has slowly started to acknowledge the wisdom of the ancient cultures and calls the meridian network the Primo Vascular system.
When the internal and external aspects of our lives become at odds with each other we become dissonant which is a lack of harmony or inflexibility. This could be for example, from stress at work causing dis-ease in the body due to the inability of energy to flow. 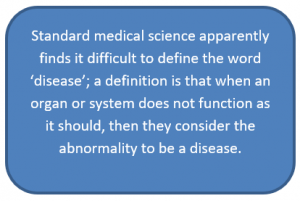 When you understand the traits and properties of each of the main energy centres and how they interact with the body, you can begin to appreciate the energetic link to physical disorders and ailments. This includes how energy and other levels of your consciousness such as thoughts and feelings impact the body; an imbalance in a chakra can manifest as dysfunction or disease within the body.

From the alternative energy medicine point of view, we consider dis-ease in the body a more appropriate description. Dis-ease can be usually be identified and rebalanced.

As an experienced and qualified Kinesiologist I use a number of techniques to support homeostasis for a client, otherwise called a rebalance. Any rebalancing involves the elements of physical structure, nutrition, emotions in priority order, as well as the energy flow of chakras and meridians. By connecting all these components balance can be restored.

With the addition of the Biofield Viewer (TM) technology as a therapeutic tool, both of us can see the energy of your chakras, biofield and the inner most etheric layer in your biofield. This specialist real-time imaging system captures photographs which are translated into psychedelic images by sophisticated software and colour coding to show the detected subtle layers of electromagnetic activity around your body.
This is a highly effective way of locating energy which is not flowing or is being shielded for some past or present reason. Where this is the case, it is likely to be creating imbalances in the body’s finely tuned systems and organs. The Biofield Viewer is able to show chakra energies. This is a substantial scientific discovery as the chakras are very significant in your overall health and wellbeing.

This visual reinforcement is very powerful for healing. It could be likened to a parent seeing the ultrasound scan of their unborn child; it makes it feel more real and is often easier to engage with the development of the baby for both mother and father; or in our case, for you to engage with the energies in your body.

The innermost layer of the biofield is known as the etheric layer. The Biofield Viewer in 3D mode makes this field visible making it possible to track even the smallest vents of bio-photons, which is a sign of impending issues. In this mode, images of the etheric field are dramatically shown in three dimensions. See image examples below. 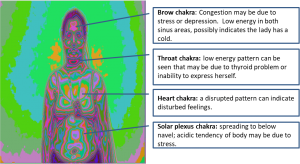 The shades and strength of colours have meaning. Here is an example of a Biofield image and the interpretation of what it is showing; it provides analysis information to discuss with you and to use in the Kinesiology treatment that will follow.

This next example below shows images of two men; the picture on the left shows a man in good health with greater prevalence of green and narrow bands which indicate a healthier landscape in the body. The man on the right has congested energy which is depicted by the pools of bright pinks.

The 3D images are dramatically different from both the biofield and chakra images. In the following example, by viewing her 3D images we found that the client was ungrounded. Being ungrounded can cause disruption in the body’s electrical systems and make you feel unsettled.

Taking a set of images is a fast, easy and non-invasive process. Images taken before and a few days after your treatment will reveal the energy improvement that have been made.

Leaving a gap before taking the second set of images gives time for your energies to settle.

The following chart summarises the relationship between the chakra, anatomical areas and the inner-self aspect with the related meridian. 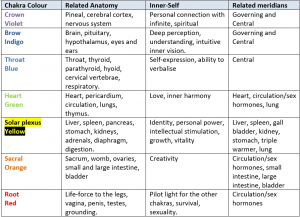 For more information about kinesiology treatments and the Biofield Viewer, please feel free to contact us.

Chakra is a yogic word from India and literally means a wheel, whereas other cultures have different name...
Read More

When a flower doesn’t bloom

Don’t you love those significant moments when you are inspired by what someone else does for you or sen...
Read More